The Looks of Jane Austen 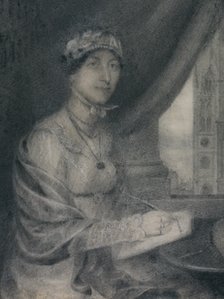 Silhouette from the second edition of Mansfield Park (1833?) , inscribed "l'aimable Jane" and presumed to be Jane Austen. Owned by the National Portrait Gallery, which considers it is possibly by Mrs Collins, a silhouettist who worked in Bath ca. 1800. There is no documentary evidence to confirm the identity of the sitter, but the provenance and title suggest it could be JA.

The Rice portrait of a young Jane Austen

Is this a life likeness of Jane Austen at 14 or 15 or isn't? That is the question about the Rice Portrait of Jane Austen by 18th-century British artist Ozias Humphry. The painting will be auctioned on April 19 at Christie’s in New York for over a half million dollars.

The Rice family claims that this image of Jane,with her simple white muslin gown and simple yet elegant hairstyle, was painted around 1788 or 1789. 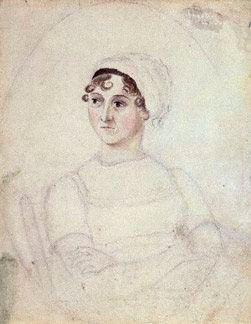 Unfinished sketch of Jane Austen by her sister Cassandra ca. 1810. The only authenticated likeness of the author, now in the National Portrait Gallery, Room 18, London

Jane, painted by her sister Cassandra. Initialled ‘CEA’ and dated 1804. This has often been reproduced in recent years, and remains in family ownership. 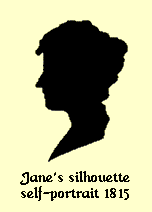 Winchester Cathedral Library has a silhouette, said to be of Jane Austen - ‘done by herself in 1815’. However, the attribution is modern and doubtful, and the style of the silhouette itself, and the appearance of the sitter, suggest a date ca. 1895. The image may possibly be of a Victorian Jane Austen (1849-1928), a grand-daughter of JA’s brother Charles. 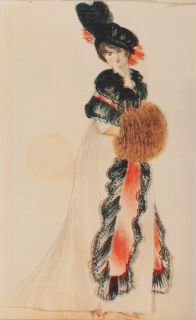 "In person she was very attractive; her figure was rather tall and slender, her step light and firm, and her whole appearance expressive of health and animation. In complexion she was a clear brunette with a rich colour; she had full round cheeks, with mouth and nose small and wellformed bright hazel eyes, and brown hair forming natural curls close round her face."

"... certainly pretty-bright & a good deal of colour in her face – like a doll – no that would not give at all the idea for she had so much expression – she was like a child – quite a child very lively and full of humour."

"Her hair was dark brown and curled naturally, her large dark eyes were widely opened and expressive. She had clear brown skin and blushed so brightly and so readily."

"She was tall and slender; her face was rounded with a clear brunette complexion and bright hazel eyes. Her curly brown hair escaped all round her forehead, but from the time of her coming to live at Chawton she always wore a cap, except when her nieces had her in London and forbade it."

" Her stature rather exceeded the middle height; her carriage and deportment were quiet but graceful; her complexion of the finest texture, it might with truth be said that her eloquent blood spoke through her modest  cheek."

" Her pure and eloquent blood spake in her cheeks and so distinctly wrought that you had almost said her body thought."

Henry Austen said of his sister