Tastes of Home in Emma

Whereas Marcel Proust offers us one evocative madeleine, Jane Austen talks of pork, apples, and cheeses.

I was born in Holland, where I spent my childhood in Den Haag until the age of eleven.  I now live in Texas and, like all displaced souls around the globe, know what it is like to crave foods whose tastes and smells convey a sense of home (for me that includes hagelslag, stroopwafels, oude kaas, pannekoeken met spek, and, of course, verse haring).  Although my fancy local grocery store in Austin, Texas, now carries many of the Dutch foods from my youth (or the ingredients that would allow me to make them myself), part of me protests the very idea of relocated delicacies.  Some foods are simply not going to taste the same in a different place.  Eating imported stroopwafels in Texas (perversely made with honey instead of echte stroop) violates a palpable sense of authenticity and belonging.

In many respects, Emma is a novel about that sense of belonging to a certain place, which Austen rather grandly refers to as “amor patriae.”  Remarkably, in Emma the central action never leaves Highbury, a small imaginary village in Surrey.  All of Austen’s other heroines, whatever their financial or social dependence, traverse significant geographic distances, travelling by necessity or pleasure to multiple counties and towns, including fashionable cities like London and Bath, or seaside resorts like Lyme Regis.  But the “handsome, clever, and rich” Emma Woodhouse has never seen the sea and admits that the picnic at celebrated Box Hill, a mere seven miles away, is her first-ever sojourn to even this nearby tourist spot.  Critics are divided about the novel’s narrow focus, with some warming to Emma’s small-town setting as snug or consoling and others detecting an acute claustrophobia or constant dread of feeling trapped and boxed in (think of all those puns hiding in Box Hill and Boxing Day).

When I was recently asked to contribute a chapter on “Setting and Community” to a planned Cambridge Companion volume to Emma, I already knew that Austen uses famous names and historically significant settings to build expectations about her characters or plots—often precisely in order to upend those expectations.  I’d just published a whole book about her use of celebrity surnames and famous locations.  But only when I began to track and map where the small household objects in Highbury come from did I notice how Austen slyly drops ordinary brand names and even foods into this story to connect her seemingly isolated and imaginary town to the larger social networks and commercial trading routes of England.

Emma, perhaps more than any other Austen novel, contains (along with the author’s hallmark namedropping of politicians and celebrities) a cornucopia of telltale foods that bespeak community.  Some of those foods feed local pride: the adage that “Hartfield pork is not like any other pork” also applies to Donwell’s strawberries (“best fruit in England”) and its apples (“the very finest sort for baking”).  But Highbury is not merely a small town proud of its own home-grown products.  Although its inhabitants exchange the important social currency of gift baskets, Highbury diet is not limited to local produce.  Modest Highbury proves a veritable hub of England’s vast trading empire when it comes to objects owned and foods consumed.  In the spirit of this topic, I share with you here a small taste of my recent research, since The Cambridge Companion to “Emma” volume will not be published for another few months:

Foods eaten and things owned in Highbury neatly reinforce the sturdy home-grown Englishness of its inhabitants, as if consumer culture becomes proof of the town’s wider nationalism.  Even at Hartfield, where the hostess has never seen the sea, she serves “scalloped oysters” to guests.  In addition, Mr Elton raves to Harriet about “the Stilton” and “the north Wiltshire” cheeses served by the Coles.  As the towns of Stilton and Wiltshire, roughly equidistant from Surrey, are separated by more than 165 miles from each other, the simultaneous presence of these two cheeses testifies to Highbury’s connection to a greater England via well-trafficked roads and trading routes—in spite of the village not lying along a main coaching route.  (We know this because Mr Elton’s trunk must be “lifted into the butcher’s cart, which was to convey it to where the coaches past”). 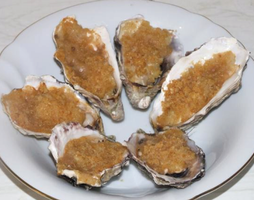 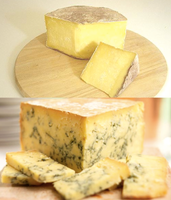 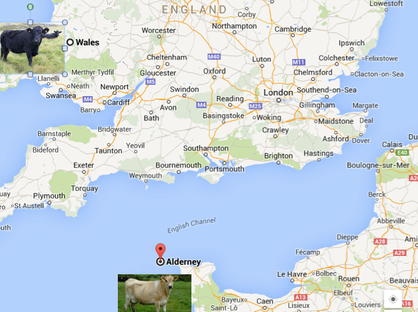 At Abbey Mill Farm, the Martins do not merely possess a generic “eight cows” but, Harriet insists, “two of them [are] Alderneys, and one a little Welch cow.”  These cows trace their bovine ancestry to specific and remote places in the British Isles, with the Channel Island of Alderney and the region of Wales at separate ends of the sweeping range of native British verdure.  Moreover, Harriet keeps her treasures not in a simple wooden box, but in “a pretty little Tunbridge-ware box.”  The box, consummately English like Miss Smith herself, derives from the area in Kent around Tonbridge and Tunbridge Wells, a spa town.  Had Austen given Harriet a ceramic Staffordshire box for her treasures, the container would be equally English but far less suitable as a signal of Harriet’s narrow compass of experiences, since Tonbridge lies only thirty miles East of the Surrey locale where critics locate the imaginary village of Highbury. 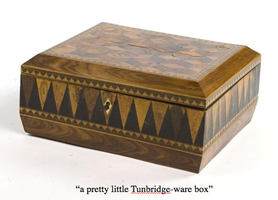 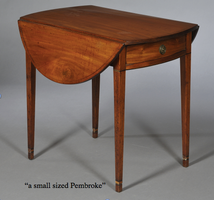 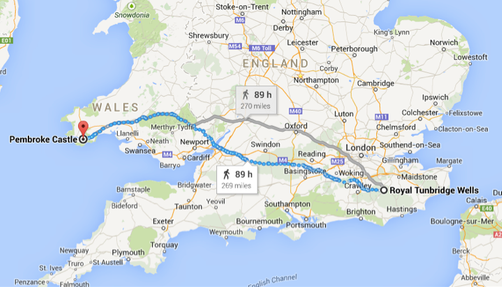 Mr Woodhouse, on the other hand, owns a piece of furniture named after an aristocratic designer from distant Wales: Emma has installed a modern dining-room table, but her father prefers to eat at the “small sized Pembroke,” an old-fashioned drop-leaf table named for the Earl of Pembroke, whose title in the peerage linked to Pembroke Castle in West Wales. (Architect Henry Herbert [c. 1693-1750] was the ninth Earl of Pembroke.)  Although Mr Woodhouse’s Pembroke table is, like its owner, almost antique, the consumer culture in Emma is overwhelmingly modern, fully enfolding Highbury when the Coles send away for “a folding-screen from London” during the planning of a dinner party.

Highbury expresses its native materialism as a relatively modest style of consumption, at least until Jane receives the surprise gift of “a large-sized square pianoforte” that arrives direct “from Broadwood’s,” a glitzy London firm based in Great Pulteney Street.  The instrument’s elite pedigree, combined with its size, signals an extravagance mismatched not merely with the Bateses’ tiny cottage but with all of the spending habits in Highbury.  As Mr Knightley remarks, the “judgment” behind this gift is suspect. 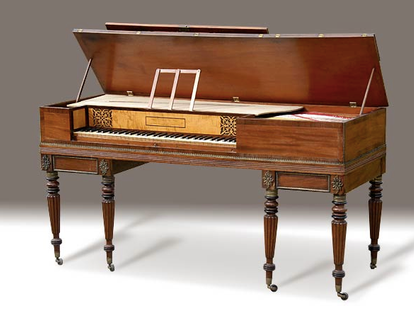 The ill-judging purchaser is, of course, Frank, whose consumer choice is already a litmus test of belonging during his earlier visit to Ford’s, “the shop first in size and fashion” in the town: “pray, let us go in, that I may prove myself to belong to the place, to be a true citizen of Highbury. I must buy something at Ford’s. It will be taking out my freedom.—I dare say they sell gloves.”  Emma approves Frank’s cementing his “patriotism” with a small purchase:

Oh! yes, gloves and every thing.  I do admire your patriotism.  You will be adored in Highbury.  You were popular before you came because you were Mr. Weston’s son—but lay out half-a-guinea at Ford’s, and your popularity will stand upon your own virtues.

On arrival at Ford’s, “parcels of ‘Men’s Beavers’ and ‘York tan’ were bringing down and displaying on the counter,” while Emma and Frank continue to chat.  Setting aside how both types of gloves might have been manufactured in England, only the “York tan” is a native species, as it were, named for the area where Frank has been brought up, whereas beaver fur was imported from Russia or North America.

Frank’s choice of gloves is indeed a test of his “amor patriae” and his Englishness.  Tellingly, Austen refuses to reveal which style Frank chooses, only that “the gloves were bought.”  Since a true patriot would purchase the native York tan, Austen’s strategic use of the passive voice may hint that Frank, with his prodigality and “air of foppery and nonsense,” opts for the fancier imported fur.  Later, in a fit of pique, he will proclaim, “I am sick of England—and would leave it to-morrow if I could.”  For a character with the name “Frank,” the outcome of any test of British patriotism seems almost over-determined! 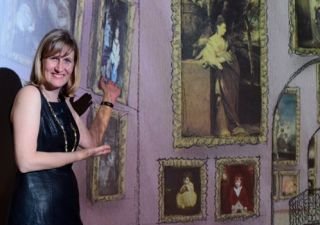 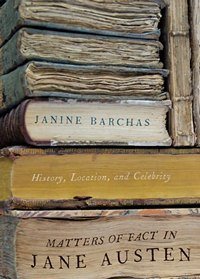 All rights reserved by Janine Barchas

--Born in Den Haag, Janine Barchas is Professor of English at the University of Texas, Austin. She is the author of Matters of Fact in Jane Austen: History, Location, and Celebrity (Johns Hopkins, 2012) and the creator of “What Jane Saw” (www.whatjanesaw.org) an on-line reconstruction of an art exhibit attended by Jane Austen on 24 May 1813.   She has written more about book covers and Austen for Book History, The New York Times, and the Johns Hopkins University Press Blog.

Janine Barchas on the 'What Jane Saw"website

© Jane Austen Society NL. It's prohibited to use the content of this website without permission. Quoting only with acknowledgement of source. Please contact info@janeaustensociety.nl for more information.